Happy Monday, bibliophiles, and more importantly…MAY THE FOURTH BE WITH YOU!

I plan to re-watch one of the movies sometime tonight…not sure which one, but I’m doing it…

I figured I needed a book fitting for Star Wars day, so I picked out one of the many Star Wars books on my TBR.

“This is where the fun begins…” 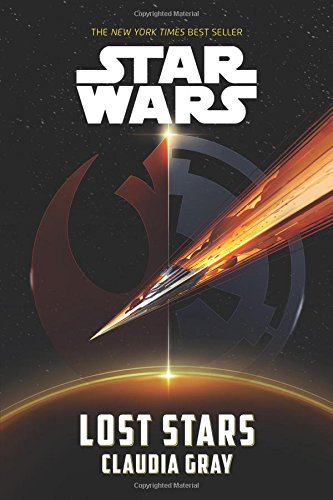 A long time ago in a galaxy far, far away…

Eight years after the fall of the Old Republic, the Galactic Empire now reigns over the known galaxy. Resistance to the Empire has been all but silenced. Only a few courageous leaders such as Bail Organa of Alderaan still dare to openly oppose Emperor Palpatine.

After years of defiance, the many worlds at the edge of the Outer Rim have surrendered. With each planet’s conquest, the Empire’s might grows stronger.

The latest to fall under the Emperor’s control is the isolated mountain planet Jelucan, whose citizens hope for a more prosperous future even as the Imperial Starfleet gathers overhead…

Since we’ve gotten the fact that I’ll read almost anything Star Wars related out of the way, let’s talk about the other major selling point for me: Claudia Gray.

It’s difficult to go wrong with her riveting writing, really. I adored every minute of the Constellation trilogy (Defy the Stars, Defy the Worlds, Defy the Fates), A Thousand Pieces of You, and Leia: Princess of Alderaan, so I doubt I’ll be disappointed in that department.

This book in particular was recommended to me by a friend in my high school’s book club, and a fellow Star Wars fan (as you might have suspected). According to him, it provides a really interesting insight into the Empire’s perspective of things–not quite Palpatine or Vader, but the workers on the Death Star. After so many years of focusing on the Rebel Alliance or the Resistance, it sounds fascinating to see things from the losing side’s perspective. Oh, and apparently there’s a good sprinkling of forbidden love. [rubs hands together] Oooh…

You all knew this was coming. You knew.

That’s it for this week’s Goodreads Monday! Thanks for (barely) tolerating all of my references! Have a wonderful rest of your day, take care of yourselves, and May the Fourth be With You!

The conclusion to the Constellation trilogy is HERE! (*ahem* okay technically it came out in April but I just got around to reading it a few weeks ago)

And man, it’s STUNNING. A beautiful conclusion to an unforgettable series.

Before reading this review, though, I suggest you read my other reviews for the previous books in the trilogy, Defy the Stars (see 5/15/18) and Defy the Worlds (see 5/22/18), if you haven’t a) caught up with some of the books or b) haven’t read the series yet. (If the answer if ‘b’ for you, then WHAT ARE YOU DOING? READ. THIS. TRILOGY.)

After the disaster that left Noemi Vidal close to death, Abel’s final goal is to save the life of the one he loves. But it won’t be easy–the only way that she could be saved is to replace some of her body parts and organs with robotic material. And the one person in the galaxy that could pull off this procedure is the person who Abel has desperately been trying to run from: none other than Gillian Shearer, daughter of Burton Mansfield, his notorious creator. Shearer is his only chance, but her intentions are more than Abel can see–she wants Abel for herself, as a vessel for Mansfield’s now detached consciousness. Can Abel save Noemi–and himself–from a fate worse than death?

Defy the Fates was a satisfying, beautiful ending to a phenomal series. Though it wasn’t  quite on par with Defy the Worlds (basically The Empire Strikes Back of the trilogy), Defy the Fates still retained the intricate writing, intriguing plot, and raw emotion that was so characteristic of the trilogy. The ending perfectly wrapped things up, and didn’t leave me wanting anything more, for what we had was just right. Thank you, Mrs. Gray, for this unforgettable gem of a trilogy. ❤️ Abel and Noemi forever!

Also…something about Abel on this cover–not the other ones, mind you, weird–looks a teensy bit like Dan Stevens. Dunno why, dunno how, it’s just this one cover. Gettin’ some David Haller vibes, guys…

Thank you so much for reading this week’s review! Have a great rest of your day, take care of yourselves, keep on reading, and most of all…enjoy your summer!