[sigh] I wish this review was different…after how much I enjoyed The Invisible Library, I’m saddened to see the direction that the series is going in. I could deal with The Masked City–maybe it was just a momentary lull–but for me, the series has gone from an inventive, inter-dimensional tale to something so much weaker. And while Cogman’s third installment in the Invisible Library was entertaining, it marks a disappointing turn in the series.

Even though her apprentice Kai is out of harm’s way, Irene the Librarian has a far greater task on her hands–the salvation of the Library itself. Alberich, the dimension-swallowing entity that terrorized her not long ago, is on the hunt once more, and he’s out for blood. Meanwhile, the gateways that the Library uses to traverse across dimensions are malfunctioning rapidly, sometimes at the cost of the Librarian’s lives. Bent on saving their home, Irene, Kai, and Detective Vale travel to an alternate Russia, where all is not as it seems. Will they be able to save their beloved library?

Compared to the genre-bending, adventurous thrill-ride of the first book, The Burning Page feels incredibly watered down. If The Masked City was the (possible) result of Cogman having used up her ideas, then this was the unfortunate after-product.

The plot felt tragically weak. It fell into the tragic trap of having a villain so powerful that…the readers don’t seem to care. Yes, he’s toyed with Irene and company before with some disastrous results, but there don’t seem to be any stakes. As much as I love Marvel, Alberich feels like some of the MCU’s worst villains (ex. Dormammu above)–they’re all powerful, but there’s hardly any stakes behind them, other than the possibility of tearing the fabric of the world(s) apart. Though Alberich did make some extended appearances in The Burning Page, he only served to make the stakes feel much lower.

Additionally, this book relied heavily on the reader’s enjoyment of the previous elements of the books. There weren’t any sort of new threats–we have the usual werewolves, fae, and dragons, but hardly anything novel (no pun intended) to grab the reader’s attention. Even The Masked City introduced the societal structure and politics of the dragons, but The Burning Page didn’t have much to offer. You’d think that with the possibility of alternate dimensions, there are INFINITE worlds and creatures that dwell in them that Cogman could have used, but sadly, it seems that she’s playing it very safe. Very safe.

But, this isn’t to say that I didn’t enjoy the book somewhat. I appreciated the extended look into the structure of the Library and some of the other librarians, so that was a good bit of world-building on Cogman’s part. And although the fact that every dimension seems to be fantasy/steampunk versions of historical places (England, Italy, France, etc.), I enjoyed the new setting of St. Petersburg, and all of the details that went into it. The flying sleighs were especially entertaining, and the new setting was a nice reprieve from the dullness of the first half of the book.

Overall, a disappointing addition to the Invisible Library series, but one that at least merited a few entertaining elements. I don’t think I have the will to finish the series now, but it was fun while it lasted. 3.5 sad little stars.

The Burning Page is the third book in Genevieve Cogman’s Invisible Library series, preceded by The Invisible Library and The Masked City, and followed by The Lost Plot, The Mortal Word, The Secret Chapter, and the forthcoming The Dark Archive.

I forgot about this song for AGES, and I rediscovered it a few days ago…needless to say, I’ve had it on repeat for…[ahem] a while…

Before I begin, I just wanted to check back on the petition I posted in my weekly update last week (to arrest the other three officers involved in the murder of George Floyd). We ALMOST have all of the signatures–we’re 96% of the way to reaching the goal–but we still need more to reach our goal! So if you haven’t, please take your time to do your part to fight back against racism and police brutality in America and elsewhere. Black Lives Matter. (The petition is linked below.)

Ever since I read The Invisible Library about a month and a half ago, I’ve been eagerly awaiting to read its sequel. Unfortunately, there was a rather long line for holds of it, so I didn’t get to read it until a few days ago. And now that I’ve read it, I have…mixed feelings. It was still a great novel, but I felt that there was something missing.

WARNING: If you have not read The Invisible Library, this review may contain some spoilers for book 1.

If you want to read my review of book 1, click here!

The Masked City (The Invisible Library, #2)

After the tumultuous search for Grimm’s Fairytales, Irene is already faced with another mission. But while undercover, her apprentice, Kai, is captured by a group of Fae from a high-chaos dimension. Now that his heritage as a dragon prince has been revealed, Irene knows that his kidnapping could lead to war between the two magical powers. As she searches for him in an alternate Venice in an eternal state of Carnival, her prowess as a Librarian will be put to the test. Will she be able to rescue her apprentice–and keep an inter-dimensional war at bay?

After The Invisible Library, I think I might have set my expectations a tad bit too high. I enjoyed it, sure, but the whole time, I just kept thinking that it felt like something was missing. And after a bit of deliberation, I think I’ve realized what it was.

Remember what I said about Cogman pulling out all the stops in book 1? Mechanical monsters, airship chases, fae, crocodiles, and whatnot? I’m beginning to think that she used all of the possible weird elements and twists, used them all in book 1, and then didn’t quite have anything left to give for this book. Now, there’s still werewolves and fae and whatnot (not to mention dragons), but I didn’t get the same feeling of WHOA as I did when reading them in book 1. Which is a shame, really. There’s so many possibilities with the topic of other dimensions, so I’d hope that Cogman has something more up her sleeve.

That being said, this doesn’t mean that I didn’t enjoy The Masked City. I did. My personal favorite aspect of this book was the in-depth exploration of the Fae. Now that we know a little bit about them from book 1, Cogman dives in even more into their culture. I LOVED the concept of them existing as their own story, and their entire purpose was just to live out some fantasy as a protagonist in their world, where humans and other creatures would merely be the background characters. That added a fascinating (and not to mention creatively narcissistic) aspect to their portrayal in the world(s) of The Invisible Library.

I still enjoyed being with Irene, especially seeing how she operated when she was left to her own devices. Both Kai and Detective Vale were gone for much of the novel, which just goes to show that she’s just as formidable of a character without them at her side. Bottom line: you don’t mess with Irene.

The stakes seemed a little lower this time, but I still enjoyed some of the action scenes. I felt that some parts were a little bit *too* easy for the characters to squeeze out of, but I could let some of it slide, because magic.

Overall, a sequel that didn’t quite live up to its predecessor, but still enjoyable nonetheless. 3.75 stars, rounded up to 4.

The Masked City is the second book in the Invisible Library series. After The Invisible Library and this novel, there is also The Burning Page (3, 2016), The Lost Plot (4, 2017), The Mortal Word (5, 2018), The Secret Chapter (6, 2019), and The Dark Archive (7, expected publication Dec. 2020). I’m definitely gonna try and continue with this series, and I already have The Burning Page on hold! (Hopefully it’ll pick back up from there…)

I forget exactly when I put this one on my TBR, but it was…fairly recently? I’m not sure. Anyway, I dug it up again for Goodreads Monday a few weeks ago, and I was once again fascinated by the premise. I’m happy to say that The Invisible Library blew me out of the water–perfect for anyone who appreciates the value of a good story! 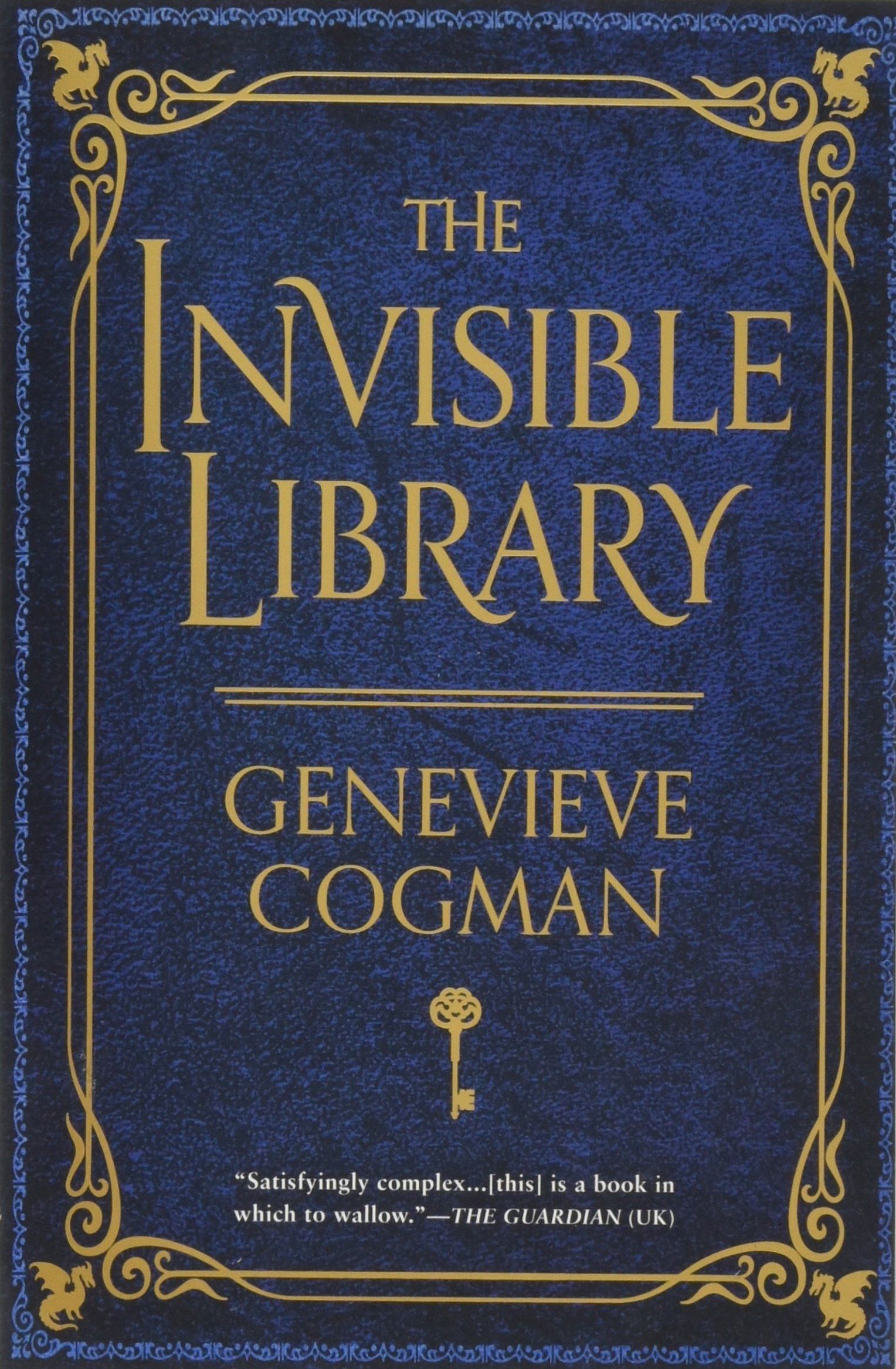 In the gap between dimensions lies the Library, which houses books from all manner of alternate realities. Their Librarians are responsible for the preservation and retrieval of these novels from dangerous hands, putting their lives on the line to protect rare fictions.

Irene is one such Librarian, tasked with one mission–to bring a copy of Grimm’s Fairytales to safety at the Library. This copy is not only hidden deep in the heart of an alternate London, a world filled with airships and mechanical beasts. To make matters worse, many sets of powerful hands seek to snatch the copy away, and by the time they’ve made it to London, the Fairytales have already been stolen. With the help of her new assistant, Kai, and a detective who’s suspected them from the beginning, Irene must retrieve the book, before it falls into the wrong hands–again.

First off: you had me at “library.” As a library volunteer and a lifelong lover of books, I always love to delve into adventures involving books, literature within literature. It’s a subgenre that’s rarely done well, but in this case, Cogman pulls it off spectacularly.

Beyond that, The Invisible Library has everything that you could possibly want in a great adventure novel. Faeries, vampires, dragons, and werewolves? Check. Mechanical insects? Check. Detectives? Another check. Evil entities? Check. Espionage and airships in a pseudo-steampunk version of Victorian London? Check, check, and check. (Oh, and there’s a few crocodiles thrown in as well. Can’t forget the crocodiles.) You’d think that with all of those elements crammed in, there’d be little room for plot, and the story would needlessly jump from place to place with no sense of direction. Wonderfully enough, this novel pulls off having all sorts of fantastical elements mixed in, while still making for a wild mystery through an unfamiliar London.

And can we talk about Irene? I LOVED HER. She’s absolutely no-nonsense, fiercely intelligent, and can hold her own against ALL OF THE AFOREMENTIONED WEIRDNESS. Beyond that, she has the unmistakable love and respect for good books, and the places that a well-written story can take you.

Kai, on the other hand…he was totally set up to be the love interest, but Irene’s dealing with it is HYSTERICAL. The whole time, everyone seems to be setting them up, but Irene can go on a mission with a member of the opposite sex without romance interfering, thank you very much. She’s much an independent, logic-ruled character. Judging from the amount of books that come afterward, there’s a good chance that they’ll get together, but I’m personally hoping that they stay friends. Guess that’s just me, fed up with insta-love.

All in all, an absolutely wild, adventurous ride, and a love song to libraries and the books they house. 4.75 stars, rounded up to 5!

In the meantime, I still have The Masked City on hold, and I eagerly wait its arrival…