Would you look at that! I didn’t forget Goodreads Monday this week! 😀

Goodreads Monday is a weekly meme started by Lauren’s Page Turners ; all you need to do to participate is to pick a book from your Goodreads TBR, and tell everyone why you want to read it. 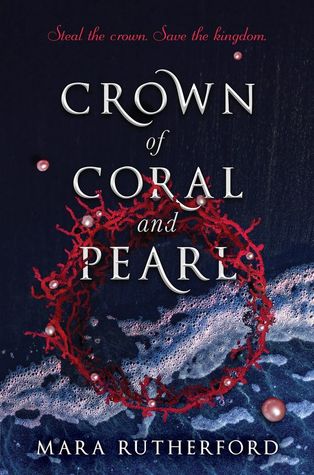 For generations, the princes of Ilara have married the most beautiful maidens from the ocean village of Varenia. But though every girl longs to be chosen as the next princess, the cost of becoming royalty is higher than any of them could ever imagine…

Nor once dreamed of seeing the wondrous wealth and beauty of Ilara, the kingdom that’s ruled her village for as long as anyone can remember. But when a childhood accident left her with a permanent scar, it became clear that her identical twin sister, Zadie, would likely be chosen to marry the Crown Prince—while Nor remained behind, unable to ever set foot on land.

Then Zadie is gravely injured, and Nor is sent to Ilara in her place. To Nor’s dismay, her future husband, Prince Ceren, is as forbidding and cold as his home—a castle carved into a mountain and devoid of sunlight. And as she grows closer to Ceren’s brother, the charming Prince Talin, Nor uncovers startling truths about a failing royal bloodline, a murdered queen… and a plot to destroy the home she was once so eager to leave.

In order to save her people, Nor must learn to negotiate the treacherous protocols of a court where lies reign and obsession rules. But discovering her own formidable strength may be the one move that costs her everything: the crown, Varenia and Zadie.

Okay, maybe it’s not exactly a mermaid book, but it seems like a good execution of the concept of undersea kingdoms. If all goes well, it sounds like Crown of Coral and Pearl has a lot of political intrigue and some interesting world building. I’m not expecting another Smoke Thieves, but here’s hoping that we’ll get *something* as good as that.

And let me elaborate on the whole “desperate to read a mermaid book” thing. I haven’t read a book in years that has executed the concept of mermen well. Case in point: Jennifer Donnelly’s Deep Blue. Avoid this one at all costs; the mermaids were uncreatively designed, as was the kingdom. And, there was the unrealistic dialogue and the onslaught of awful puns that the author seemed to think that we were going to take seriously. Just stoooopppp. Ally Condie’s Atlantia has a similar plot to Crown of Coral and Pearl, but it fell into a nearly identical trap: corny dialogue, cardboard characters, etc. So yeah, I really need a good mermaid book. Soon. Right now. 🅱LEASE?

Crown of Coral and Pearl came out a little under a month ago, so here’s hoping I can find it and read it soon! 🧜‍♀️

Thank you so much for reading! Have a great rest of your day, and take care of yourselves! I’ll be back tomorrow for this week’s Book Review Tuesday, and I’ve also been (discreetly) tagged in my VERY FIRST BOOK TAG…so I’ll be getting to that soon as well! (Thanks A Little Haze Book Blog !)