I’ve talked briefly about this novel on Goodreads Monday and Everything That I’ve Managed to Cross Off of Goodreads Monday or Down the TBR Hole (Part I of ?),but I wanted to take the time to write an entire review for this one just to get out some…feelings. My addled brain thought this book had mermaids, and I was desperately wrong; that disappointment may have skewed my feelings on the rest of the novel, but even beyond that, Crown of Coral and Pearl was a fairly forgettable novel, though it did have a few bright spots. 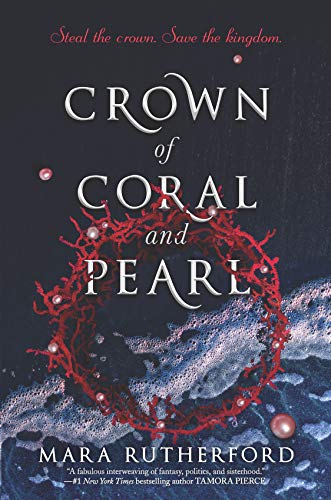 For centuries, the mountain kingdom of Ilara has demanded tribute from the lesser coastline village of Valeria–once the Ilaran Crown Prince has come of age, a Valerian bride must be sent to become the queen of Ilara. What emerged in Valeria was a morbid beauty pageant among the eligible girls; only the most beautiful and unblemished girl could be considered to be sent to the Crown Prince.

For her whole life, Nor has known that her twin sister, Zadie, would be sent to live in Ilara; a scar on her face ruined her own chances of being eligible. Zadie is chosen, but on the night before being sent to Ilara, she retains a near-fatal injury, and Nor is sent as her replacement. Undercover as her twin sister in the Ilaran palace, she meets Prince Ceren, her groom-to-be, who may be harboring a secret that may spell the end of life as the Valerians know it. Will her secret be discovered–and will she be able to save her home from Ceren’s wrath?

All kinds of meh…

I’m not sure what genre to put Crown in, and for once, that…really isn’t a good thing. It’s been most often shelved as fantasy on Goodreads, but other than the fact that there are a few magical creatures and a bit of mythic lore, there’s nothing that would peg it as fantasy. Same with science fiction, too, but the closest I could say is that it was fantasy.

Crown of Coral and Pearl, for all intents and purposes, was a mass regurgitation of the same plot that’s been plaguing YA for the past decade or so–forced arranged marriages that lead to the toppling of the royal family/government/society. Not to say that it can’t be well-executed from time to time, but it’s just been done innumerable times before, and it’s been stale for far too long. Not the most original of books.

I…sort of liked the characters. Though most of them were pressed from the mold of said arranged marriage plots (the determined heroine who is Not Like Other Girls, scheming prince, royal love interest, etc.), they were decently written. I did sort of have a liking for Talin, Ceren’s brother, even though the romantic subplot between him and Nor could be seen a mile away. Nor had some moments of being wonderfully butt-kicking, and her twin relationship with Zadie was very well-executed and genuine. The dialogue was very forced, but overall, characters seemed to be something of a stronger point here.

Overall, Crown of Coral and Pearl had the beginnings of good characters and writing, but ultimately fell prey to many of the overused tropes that run rampant in the YA genre. Two and a half stars for me.

Crown of Coral and Pearl is the first in a duology. The final book, Kingdom of Sea and Stone, comes out this October.

That’s it for this week’s Book Review Tuesday! Stay tuned for more content later in the week! Have a wonderful day, and take care of yourselves!