Happy Sunday, bibliophiles! I hope this week has treated you well.

This was my first full week of school, and…well, it had its ups and downs. College applications have been a bit stressful, but now that I’ve seen everything a little more simplified, it’s slightly less so. Still stressful, but at least I know how everything works now. But on the other hand, I had some great things happen this week! I aced a math quiz, I have As in all of my classes so far (I don’t care that it’s the second week of school, I’m still proud of myself), and I’m slowly getting more people into book club.

Reading-wise, I’ve just been reading through all of the books I bought/was gifted for my birthday. Most of them have been pretty good, but re-reading The Mermaid, the Witch, and the Sea was just what I needed to take my mind off of college. I got some cool-looking books at the library, so I’m excited for that! As for writing, I haven’t been doing it as frequently as I’ve been getting used to my school schedule, but I’m slowly but surely working through the climax of my sci-fi WIP.

Other than that, I watched The Suicide Squad (solid 3/5 for me, fantastic cinematography and also the best live action Harley look), had a busy shift at the library, and busily tried to convert people to my school’s book club. But the latter isn’t too out of the ordinary for me, really.

Oh, and in case you’re having a bad day, enjoy this picture of one of my cats (her name is Hobbes) with my library books:

Girls at the Edge of the World – Laura Brooke Robson (⭐️⭐️⭐️)

She Drives Me Crazy – Kelly Quindlen

As you can all probably guess from my icon, I love cats, and this tag instantly caught my eye! I found this on Time for Tales and Tea, and the tag was originally created by Kate@ meltingpotsandothercalamities.

First off, I’ve seen most other people who’ve participated put in some pictures of their cats, so I thought it would be fitting to put mine in here as well.

This is Padmé; she’s incredibly chatty, and has an affinity for clinging to people’s left shoulders. Doesn’t matter who’s shoulder it is, so long as it’s the left shoulder. Don’t question her.

Here’s Anakin, Padmé’s younger cousin. He and Padmé are inseparable. He’s also an itty bitty little cat, even at about 11 years old. 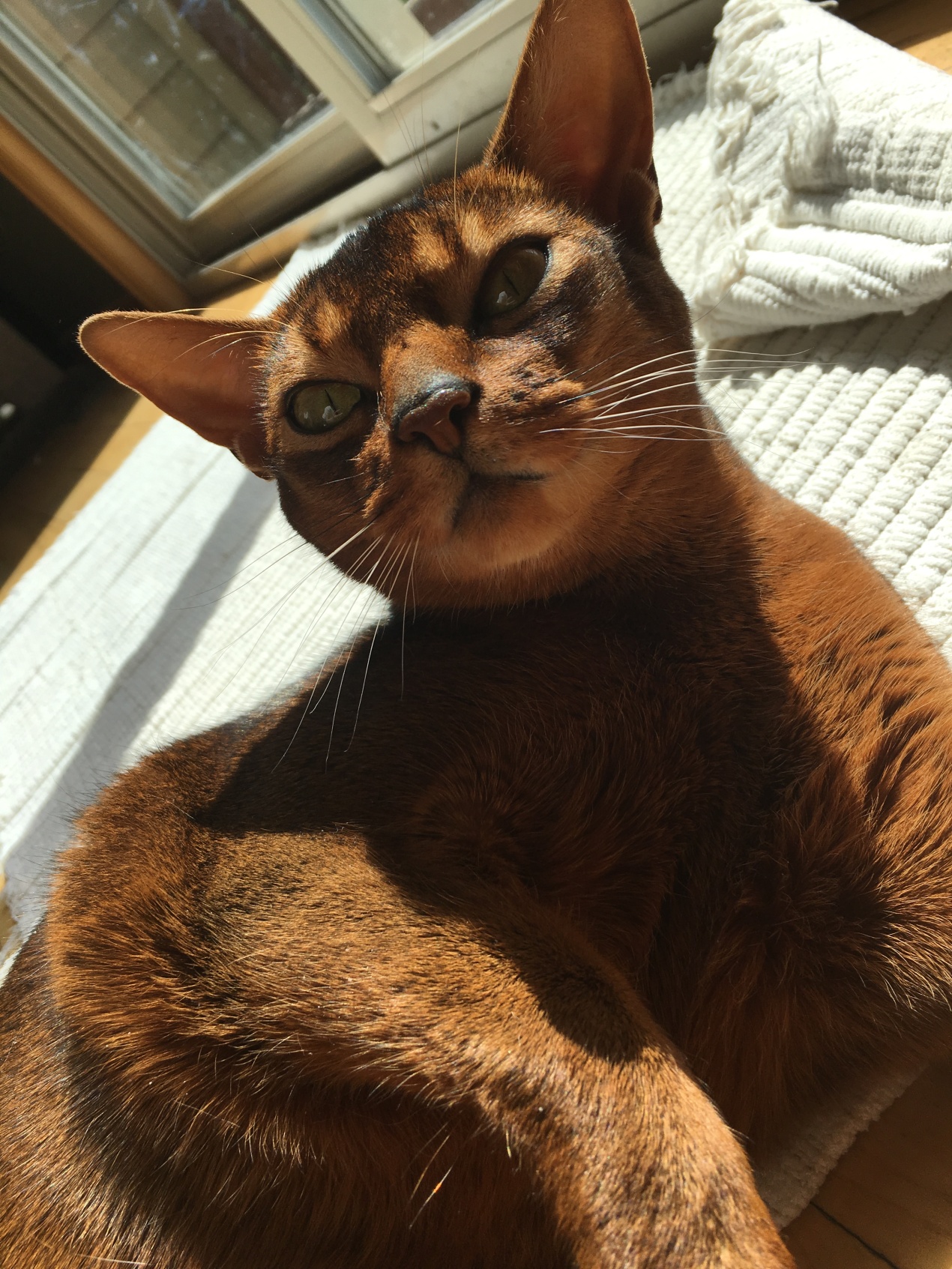 Finally, here’s Hobbes, the newest of the bunch. Most of the time, she acts too dignified to be petted, but when she’s affectionate, she’s the sweetest little cat around. (In fact, she’s sleeping right above me as I write this out.)

Now, onto the tag…

PURR – As cats do this when they’re happy or relaxed, what is the book that makes you happiest or relaxed? 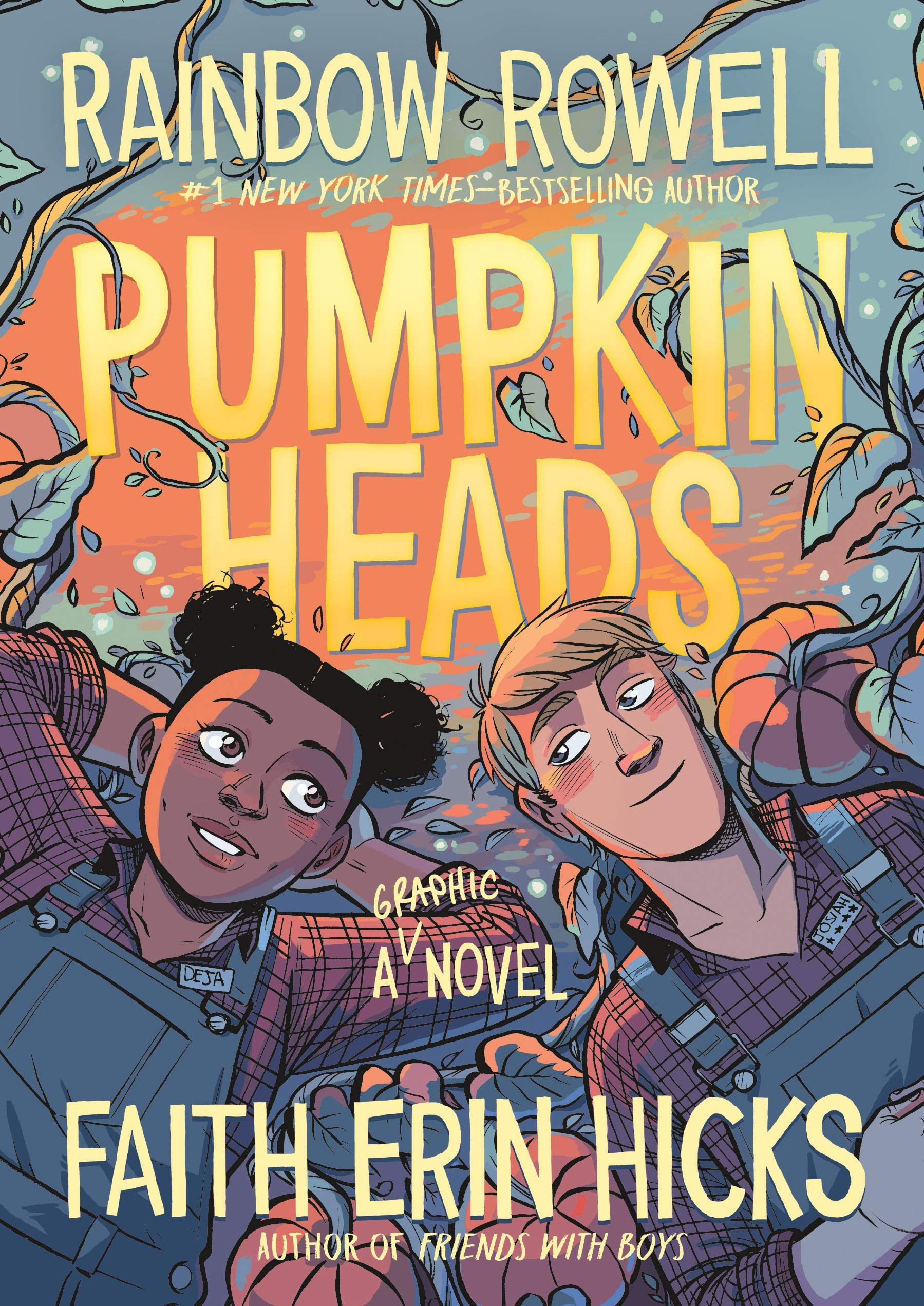 Pumpkinheads never fails to give me all the warm and fuzzy feels, no matter how I’m feeling.

SLEEP – What is a book that put you to sleep or was just boring? 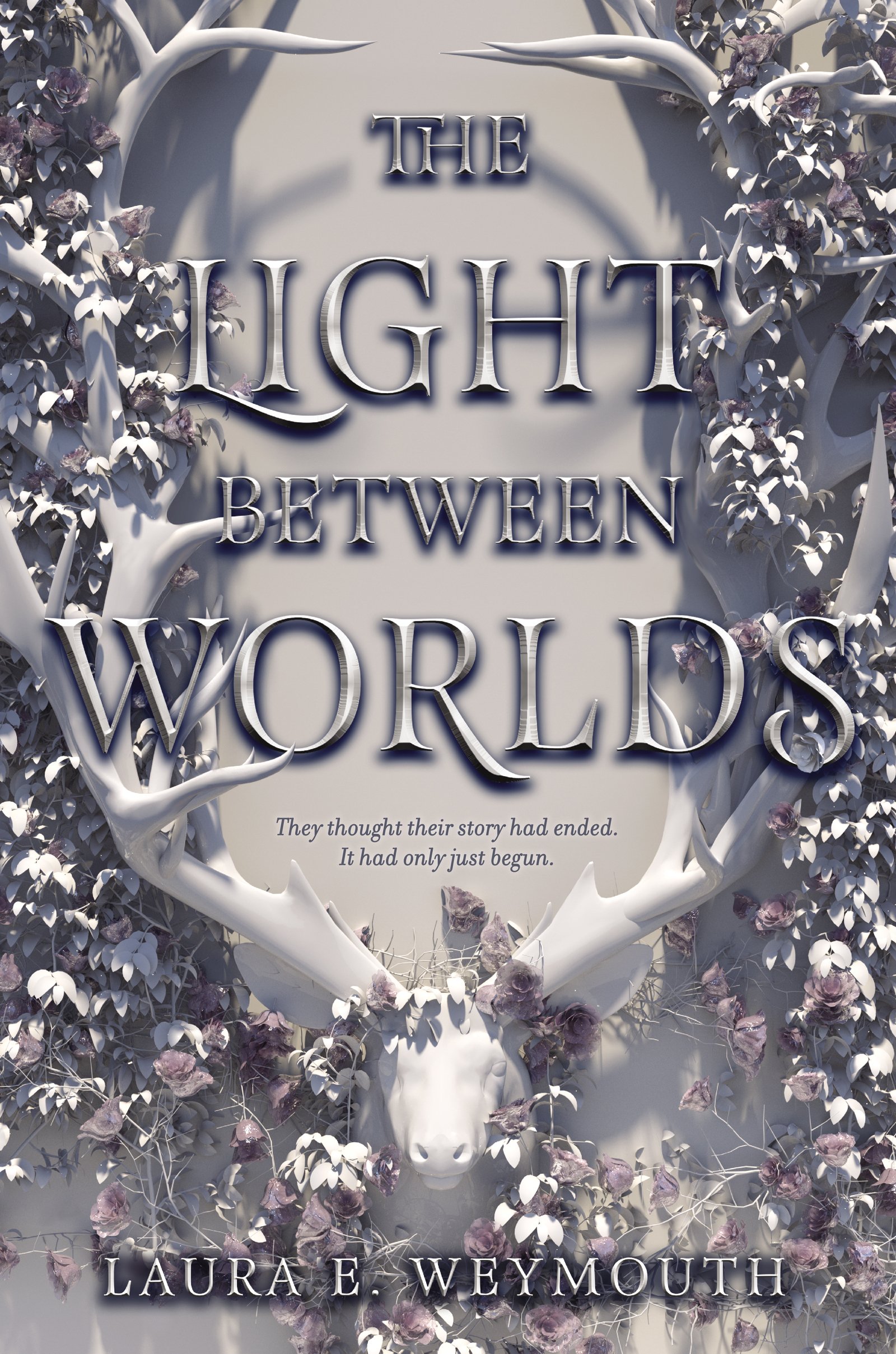 Though the cover was deceptively gorgeous, The Light Between Worlds very nearly put me to sleep.

TWITCH WHILE DREAMING – Have you ever dreamt of a book you read? 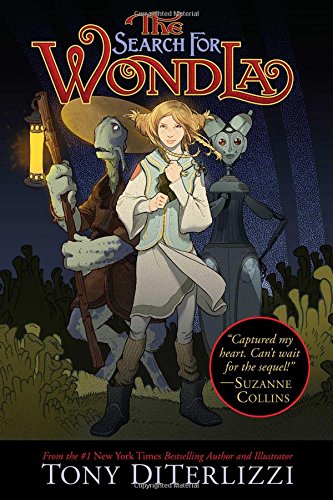 An after-product of having read this innumerable times (“I lost count at 50,” as I used to say), I’ve definitely dreamt about The Search for WondLa series more than one time.

SEEMS TO PLAY NICE UNTIL THE CLAWS ARE OUT – Which book had the biggest plot twist(s)? 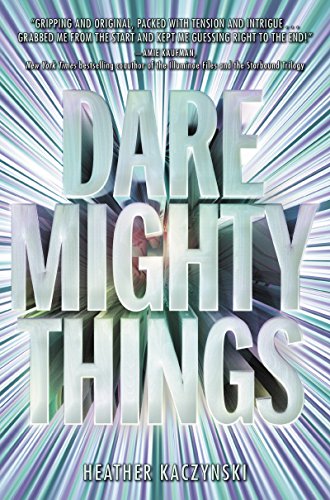 As far as Dare Mighty Things goes…two words: Brace yourself.

CUDDLES – Which book character would you give a hug to? 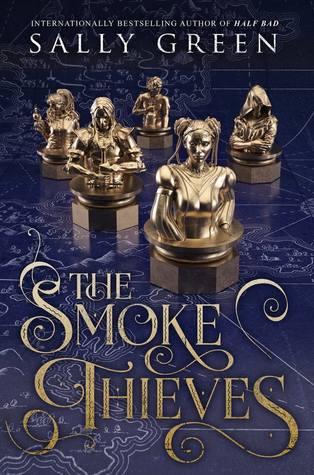 Without question, March from the Smoke Thieves duology. After all that he’s been through, he’s fully deserving of it. 💖

CAT BREEDS – What are your favorite books?

Frankenstein, the Arc of a Scythe trilogy, the Heart of Iron duology, anything by Ray Bradbury, and Like a Love Story, to name a few.

GETTING THE CAT – How did you find your favorite book(s)?

Most of my favorite books have been recommendations from Goodreads, but just as often, I’ll find them hidden between the shelves in libraries or advertised in the back of other books.

I know I’ve  ranted about Smokeless Fire, Red Queen, and The Witch of Blackbird Pond innumerable times, and I don’t wish to be redundant, so I’ll try out one of my much-loathed DNFs… 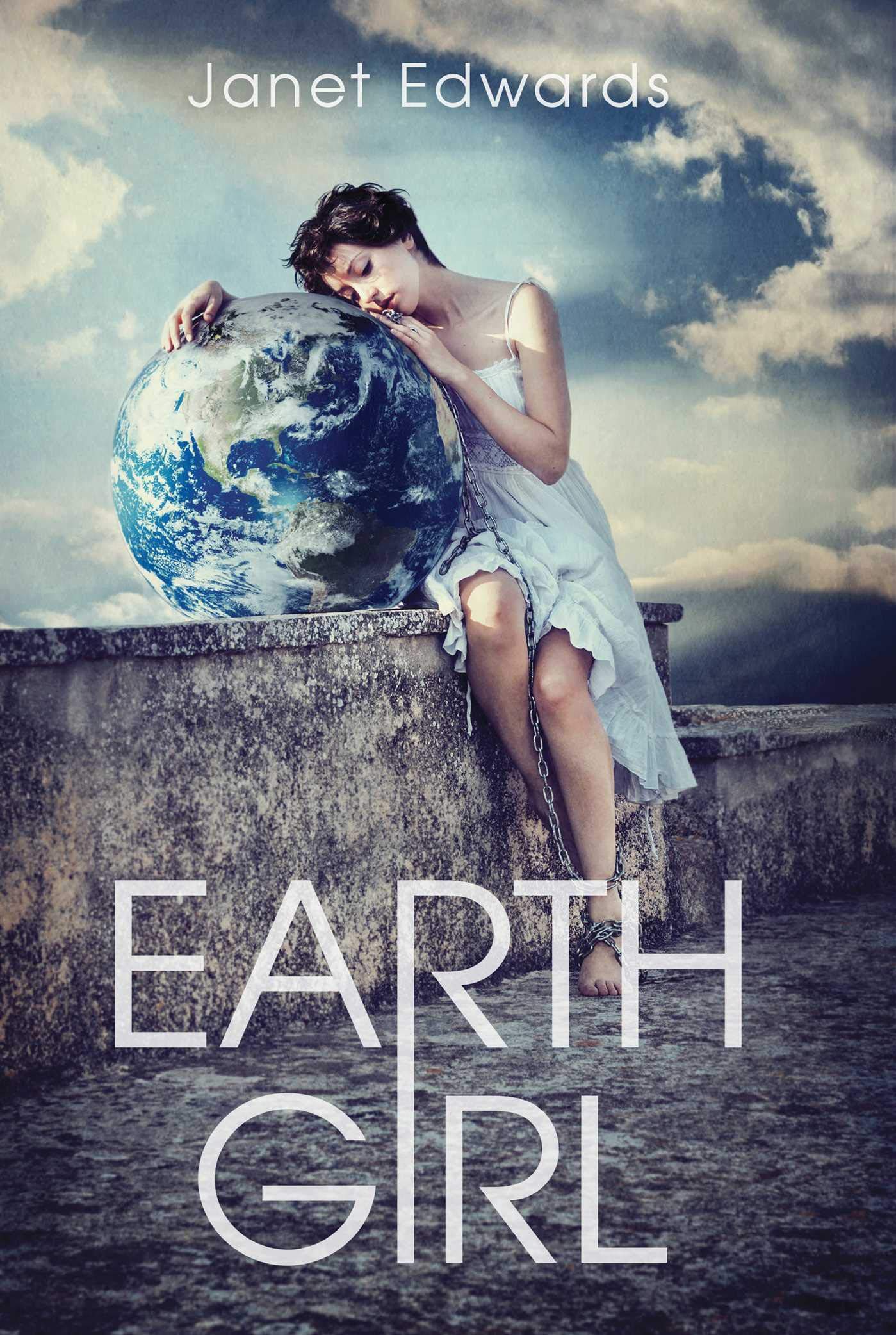 OH. OH. I forgot this book existed for a minute there…

YIKES. The corny names. The cringy, fake slang. The timeline. God, Earth Girl really was something of a train wreck…

BEING IN PLACES THEY SHOULDN’T – Least favorite cliché:

If I had to pick…most definitely love triangles. Much of the time, they only serve to muddy the existing plot with unnecessary angst and bickering. I won’t be sad to see them phase out of YA literature. I sure hope they do. AAH! Without question, the Faloiv series! (consisting of A Conspiracy of Stars and An Anatomy of Beasts) I doubt I’ll ever find another series with this amount of attention to detail in the worldbuilding.

Hey everyone! I’ve been meaning to do this post for months, and I’m only now getting to it (wow, self).

Since late October, when my family adopted Hobbes, I’ve learned a lot of little tips and tricks for taking pictures of cats. I just thought I might share a few with you!

1. Don’t use the flash (unless you absolutely need to)

Cat eyes are very unique-they have a layer of tissue on their pupils called the tapedum, which increases the amount of light that the eye absorbs, making their night vision outstanding. This is why cat’s eyes appear to glow in the dark. That being said, if you use the flash, the tapedum kicks in, causing your cat’s eyes to glow, and therefore make them look like they’re possessed by a demon. 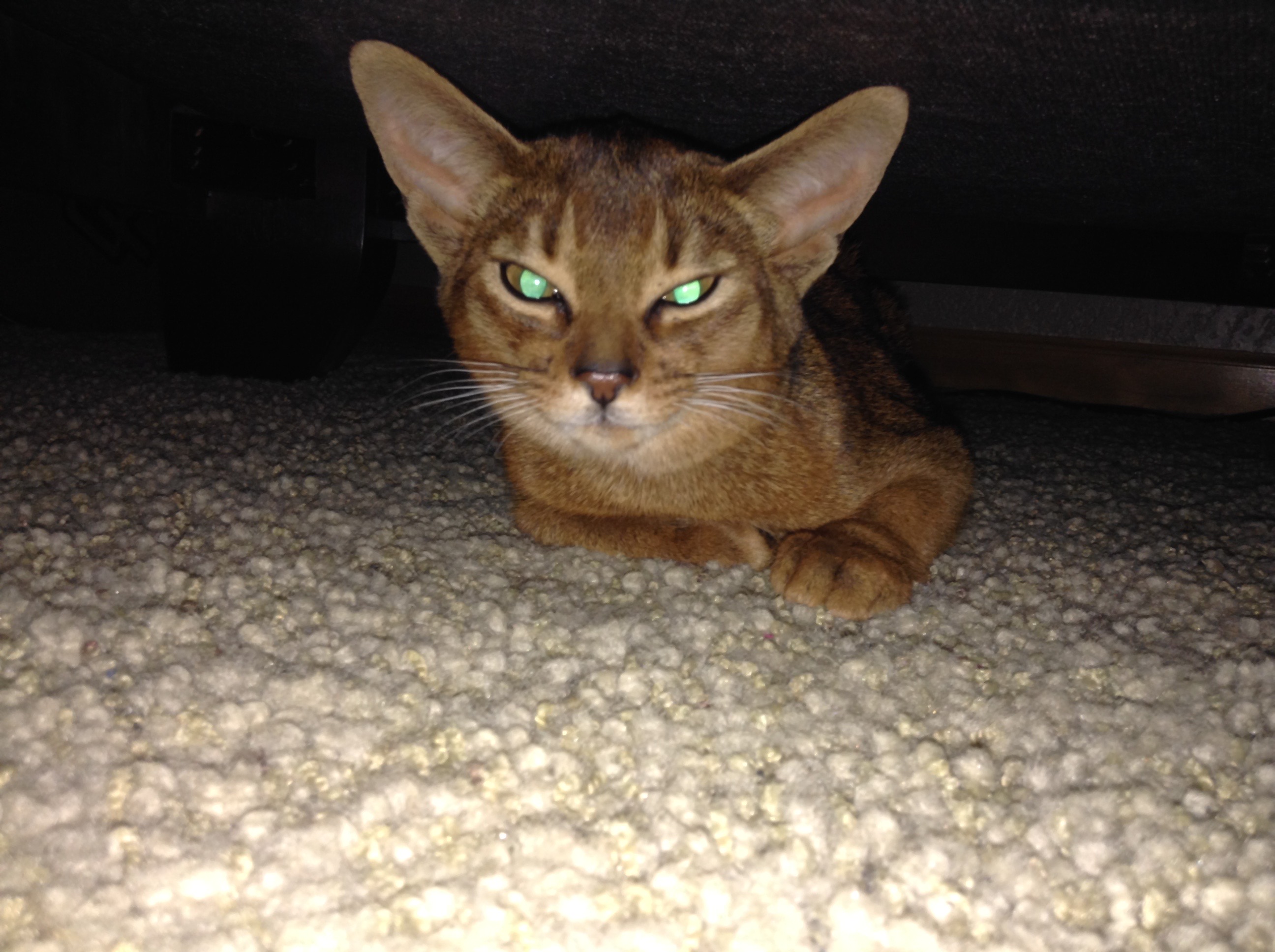 Cats, especially kittens (like Hobbes, who is now almost a year old), are very active, and will not stand still for long. So, when taking pictures of your cat running around, hold the camera button down (for iPhones and other devices like that) or push the button down really quickly a bunch of times (for regular cameras). You’ll get a lot of blurry shots out of this, but some results are hilarious. 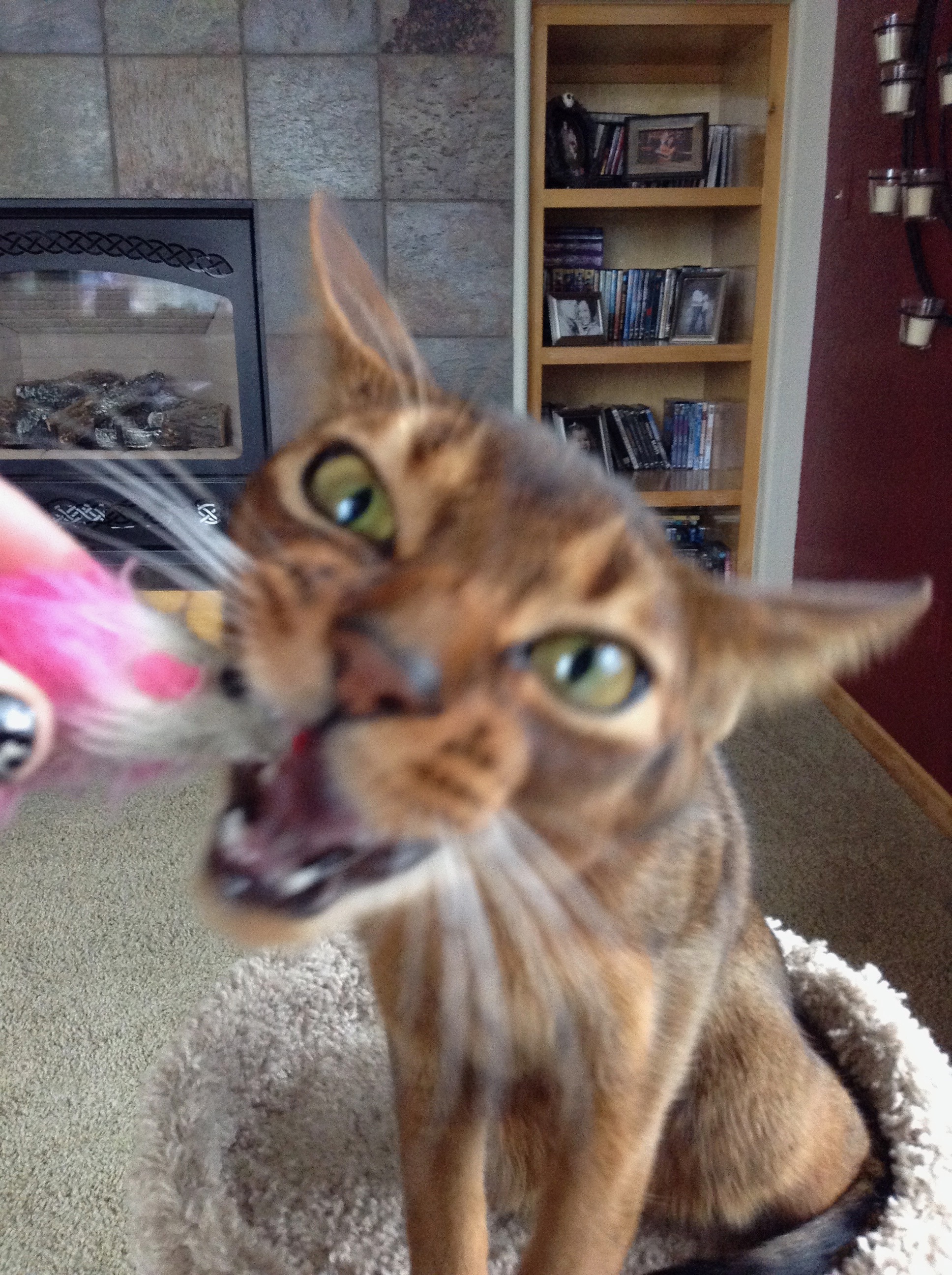 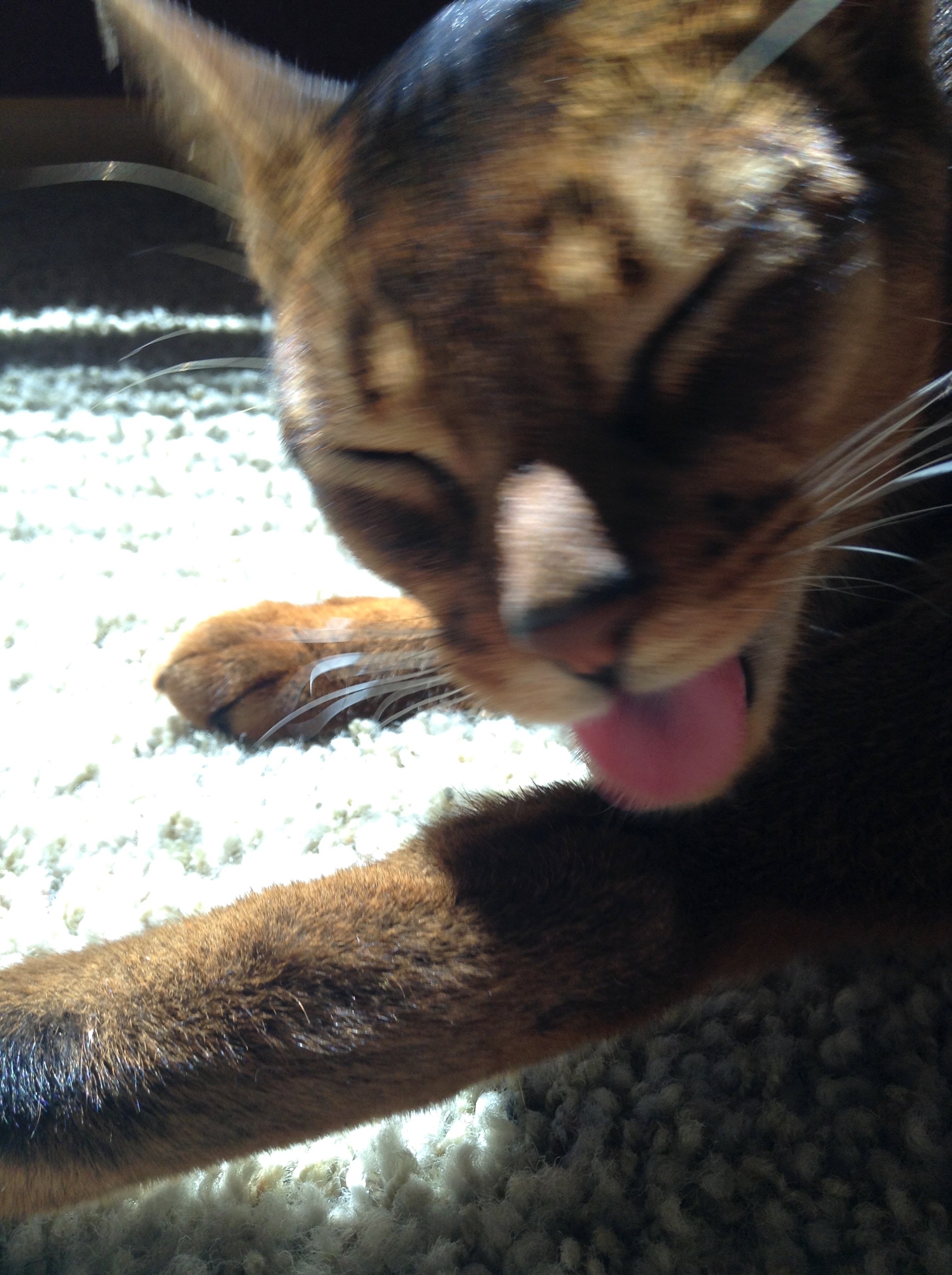 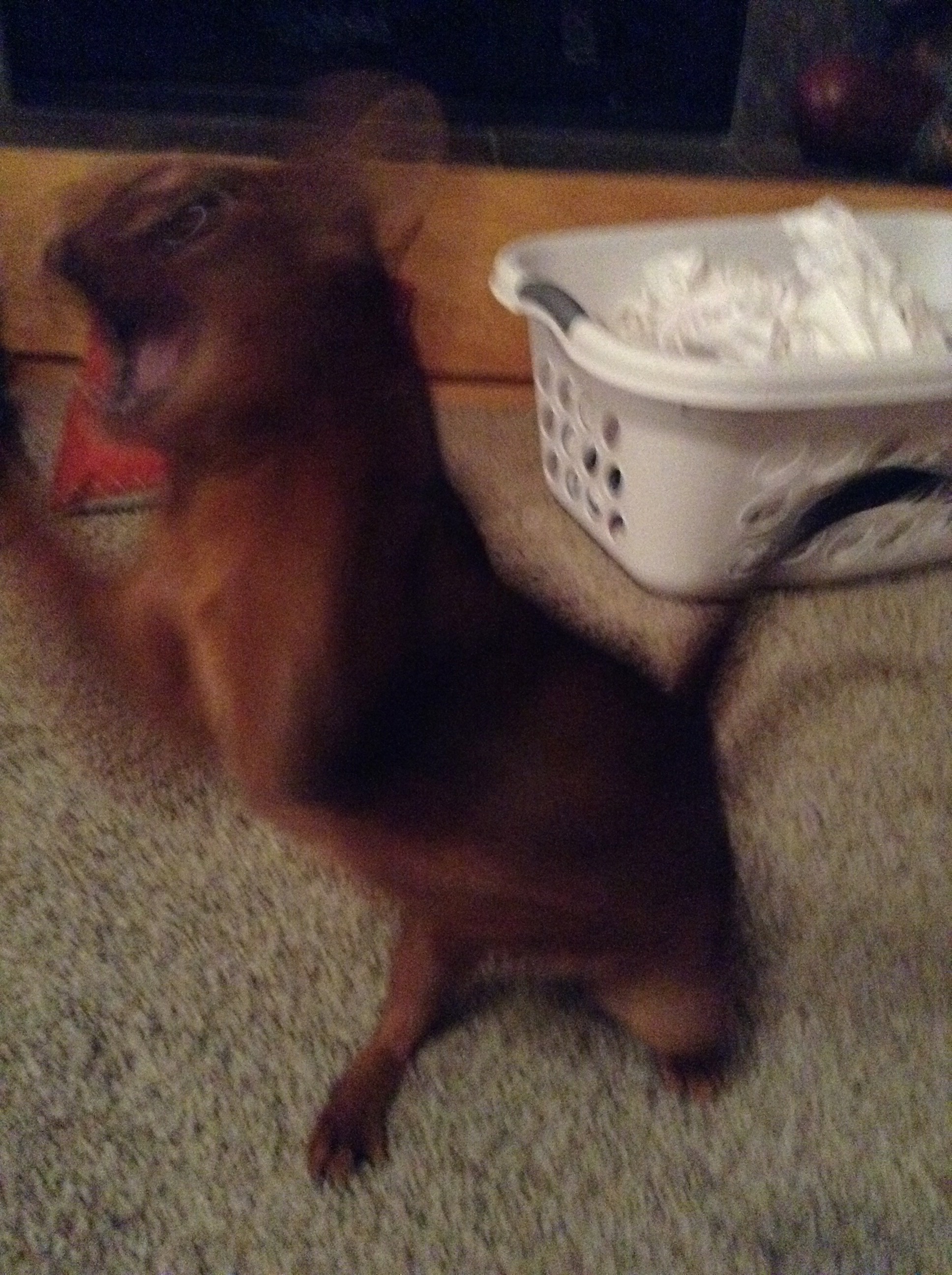 3. Use a toy to get their attention

Cats are not exactly the most photogenic creatures (Hobbes, I’m talking about you), and they, kittens especially, have kind of a short attention span. So, one way to get and temporarily keep their attention is to wave or shake a toy behind the camera. It works, and they’ll usually look really funny because their pupils tend to dilate. 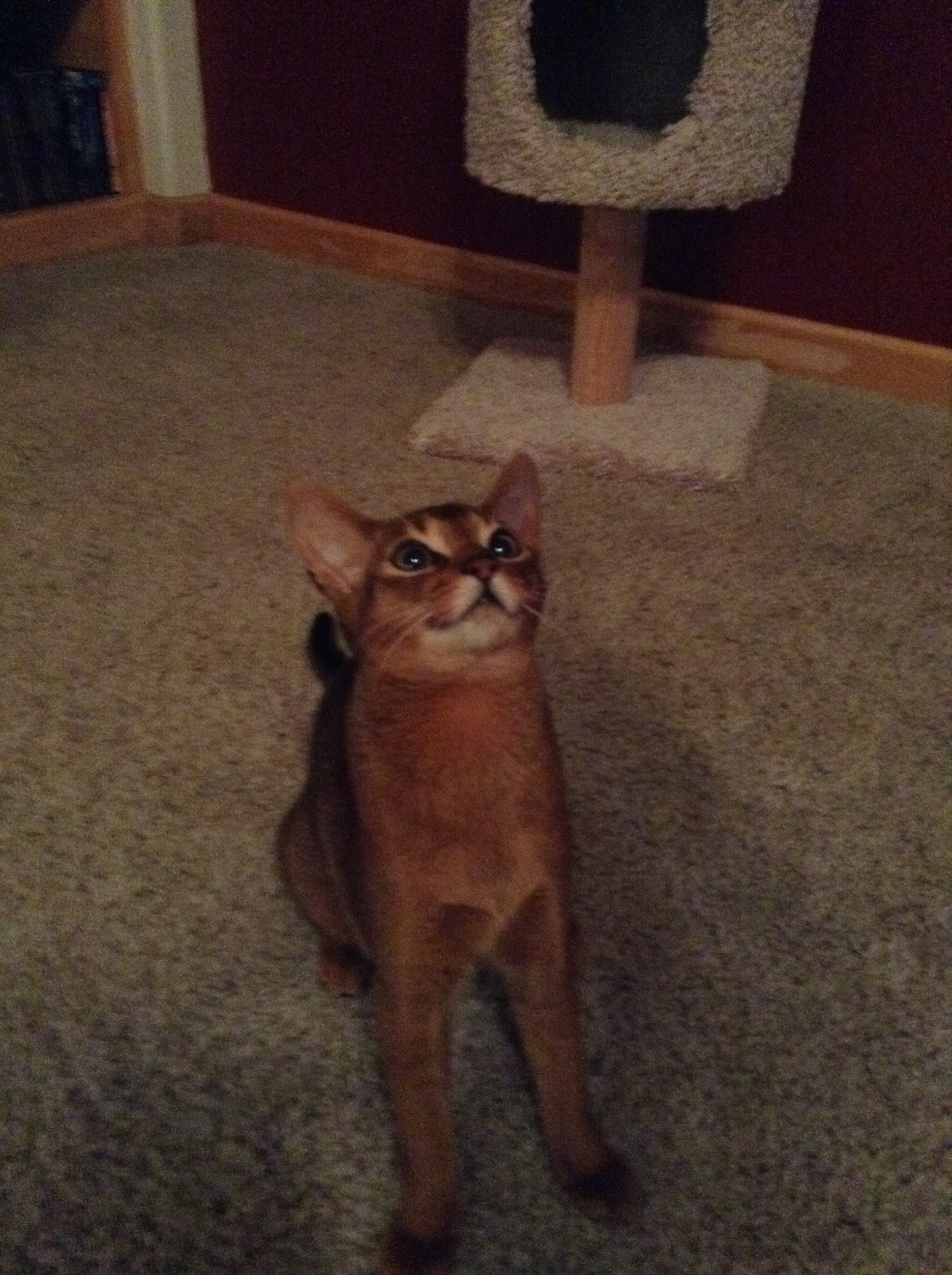 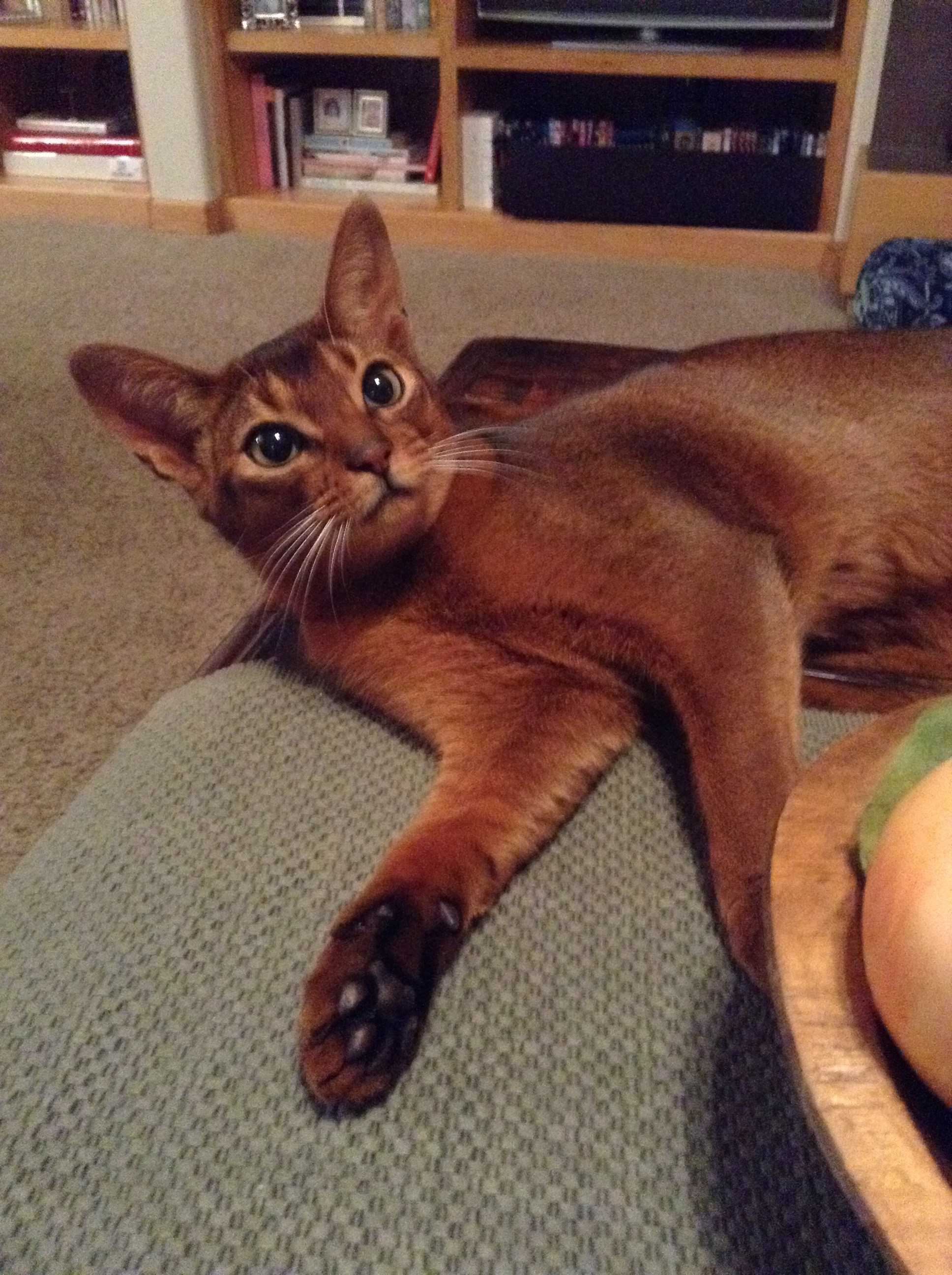 4. Capture every moment you can

Cats pretty much look cute no matter what. Most of what they do is ADORABLE, so take lots of pictures to capture the personality of your friend. Sleeping cats look SO SWEET, cats in their “you may worship me now” pose are always hilarious, and meowing shots are always good for a laugh. So take advantage of this time with your cat, and take as many pictures…as your iPhone storage will allow. 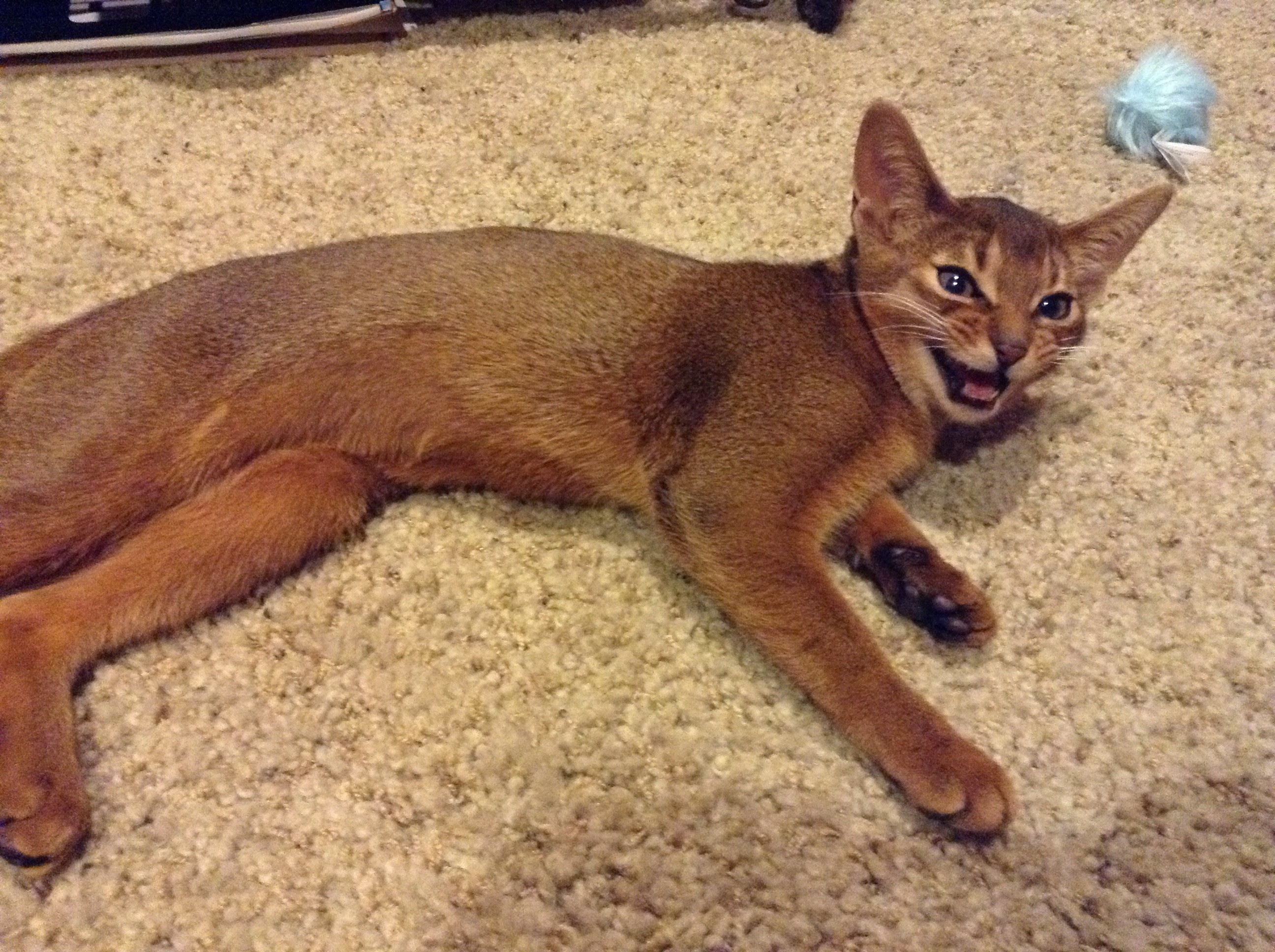 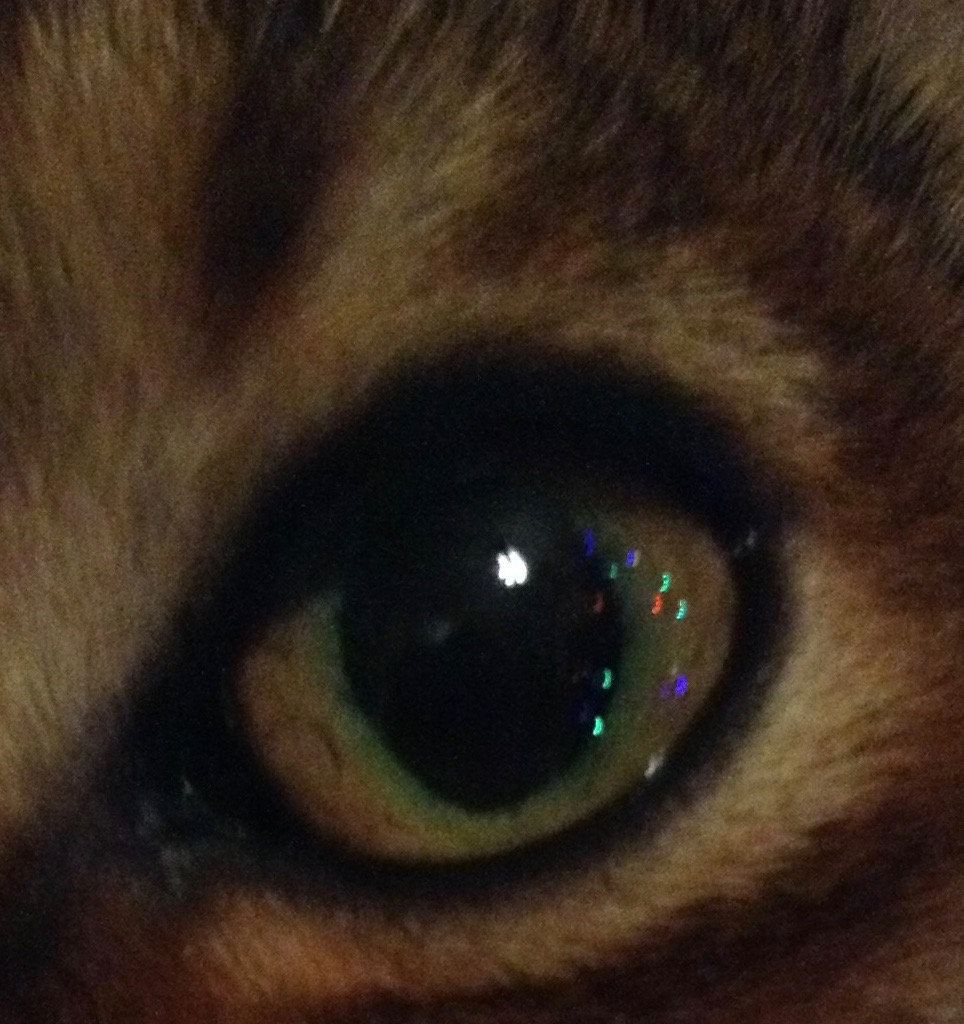 Thank you so much for reading, and have a great summer!

Hello again! I have delivered you the promised book review of the MUCH ANTICIPATED (by me, at least) Ruby Key. Aaaaaannddd…

I would probably give it about an eight on the MTBRS. YEE!

So here’s your revi—-

HOBBES, QUIT JUMPING ON ME AND SCRATCHING UP THE COUCH.

Genna and her brother Dan live in a world in the midst of an uneasy truce with humans and nightlings. One night, the twosome come upon a nightling slave, and she tells them a horrifying secret- their uncle Banris has made a deal with the nightling kai-lord Letrin. If Letrin can kill off enough humans, Banris will gain immortality. Can Genna, Dan, and the slave stop the deal-and escape death themselves?

I started and finished this on Christmas day, and I was totally hooked. Highly recommended for all fantasy lovers!

Now, notice how I didn’t say anything about this being the last Book Review Tuesday of the year.

This Thursday marks the one-year anniversary of the first BRT, and I am doing another book review to celebrate! So, see you Thursday, and hang in there-4 DAYS TILL 2016 ENDS!

Hey guys! If you’re in America, have a happy Thanksgiving. If you’re not, I still hope you have an awesome day. Besides being thankful for  family, friends, food, and stuff like that, you know what else I’m thankful for?

I’m very thankful for all of my followers! Thank you, all of you, for tolerating my weirdness/fangirlness, liking and commenting on my posts, taking my *quizzes*, and just being there. Thank you so much.

Just for the heck of it, here’s a picture prior to the baking of the HOLY PUMPKIN PIE

And, here are some more Hobbes pics to satisfy your hypothetical hunger for cute kitten pics:

Evidently, she likes my screensaver…

I just about died after I saw this picture!!!

So yeah! Have a happy Thanksgiving and a great day!