Hello, fellow bookworms! Today, I am showing to you one of my personal favorite series-The Familiars. It used to be my favorite, but back in 2015 The Search for WondLa series shoved it down to number two. That certainly doesn’t mean that it’s bad. So, here you are:

Aldwyn the alley cat is in for the adventure of his life. When fleeing a bounty hunter, he hides in the Familiar shop-a place where wizards adopt their magical companions! And now, Aldwyn himself finds himself the familiar of the wizard apprentice Jack. But when Jack and his friends are captured by the evil queen, he, along with familiars Skylar and Gilbert, must rescue them. 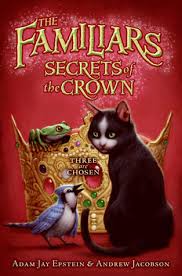 The Familiars-Secrets of the Crown

Jack and the loyals are safe. Aldwyn has discovered his powers. And the evil Paksahara is on the rise. Now, in order to stop her, Aldwyn, Skylar, and Gilbert must find the Crown of the Snow Leopard-the key to the shifting fortress. If the familiars get to it first, Vastia is safe. But if Paksahara gets it, she will unleash a deadly force that may mean the end of Vastia itself…

Paksahara has control over the Shifting Fortress, and now her Dead Army has besieged the lands. In order to stop her, Aldwyn, Skylar, and Gilbert must gather the Seven Descendants before time runs out…

Vastia is finally safe…for now. But when the queen is unexpectedly poisoned, the Familiars must find an antidote before it’s too late. Will the queen live? And-will Aldwyn find his long-lost sister, Yeardley?

I hope I convinced you!

R.I.P. David Bowie 😥 We will miss you for eternity.